10 male and female test subjects between the ages of 18 and 65 years with severe or very severe dandruff.

Tenacious dandruff (Pityriasis simplex capitis) is a cosmetic problem that occurs throughout the entire population. However, due to increased sebum production, males are frequently more strongly affected, since sebum promotes the formation of dandruff.

Dandruff occurs due to the increased detachment of keratinous cells that are normally not visible to the naked eye. However, if the scalp loses its balance, there is increased growth of yeast (Malassezia ovalis), which irritates the scalp and encourages the formation of keratinous cells. Excessive sebum makes these cells stick together to form large, visible dandruff.

This study tested the performance of a novel shampoo that for the first time combines four anti-dandruff ingredients with different modes of action. Zinc pyrithione and piroctone olamine have an antimicrobial effect against fungi, yeast and bacteria; salicylic acid and fumaric acid help remove existing dandruff. The combination of these principles is designed to help reduce dandruff in a sustained manner.

The test was conducted with test subjects between the ages of 18 and 65 years who suffered from severe or extremely severe dandruff. To ensure that all test subjects started the study under comparable conditions, the test subjects‘ scalps were prepared with a neutral shampoo without anti-dandruff ingredients for two weeks prior to the start of the study.

Subsequently, the test shampoo was applied under standardized conditions for a time period of four weeks. After 14 and 28 days of application, standardized photographs of the scalp areas were taken. Based on these photographs, the formation of dandruff was assessed and quantitatively classified by a dermatologist.

Figure 1 Scalp at the start of the study

Figure 2 Scalp after 14 days of use

Figure 3 Scalp after 28 days of use 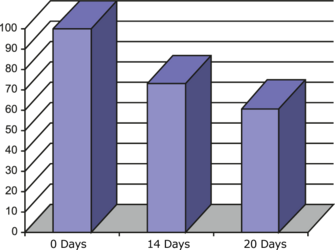 The present study shows that an excellent and sustained reduction in dandruff took place based on the combination of the four anti-dandruff ingredients. The different modes of action of the four ingredients ideally complement each other. Salicylic acid and fumaric acid facilitate the removal of existing dandruff, and the smoothed scalp surface prevents the new colonization of microorganisms. Based on their antimicrobial properties, zinc pyrithione and piroctone olamine prevent the formation of new dandruff and restore the scalp’s natural balance.