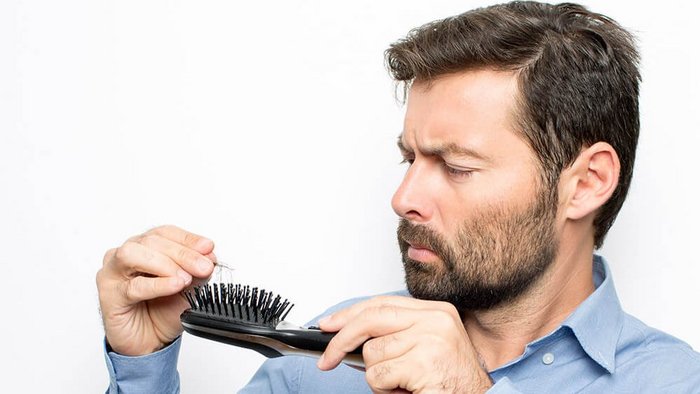 Up to 80% of hair loss is hereditary

Hair loss can be put down to many reasons. However, 80% of men suffer from hereditary hair loss (androgenetic alopecia), i.e., thinning of the hair is, for the most part, genetically preprogrammed. It is irrelevant whether the men with receding hairlines and bald spots are on the paternal or maternal side. The good news: hereditary hair loss can be stopped. And this can be achieved without medication. 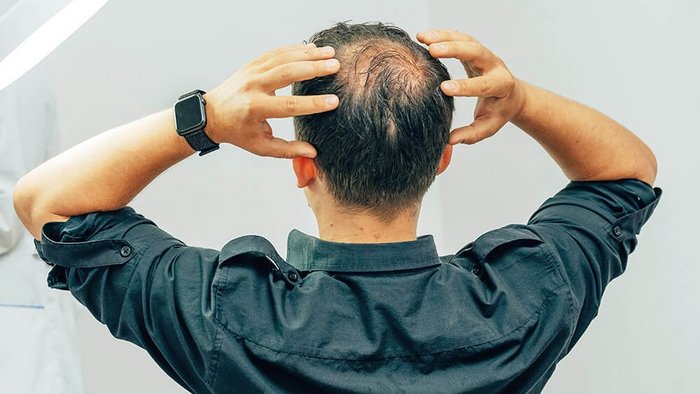 Eight out of ten cases of men who suffer hair loss can be put down to genetics, in 50% of cases, the hair starts thinning between the ages of 20 and 25. The hair normally starts receding at the temples and in the next stage starts to fall out from the top of the head to create a tonsure. Before all the hair falls out, a crown remains which becomes increasingly thin.

Why is this process almost identical among all sufferers of hereditary hair loss? Experts assume that the temples and top of the head which are affected by hair loss are more sensitive to DHT amongst other things.

DHT as a cause of hereditary hair loss

An active metabolic product of testosterone, dihydrotestosterone (DHT), is responsible for hereditary hair loss.Every hair passes through a three-phase growth cycle before it falls out and a new hair grows to replace it. This ensures that not all hairs grow or fall out simultaneously.

The hair follicles divide rapidly and form new hairs; the hair grows approx. 1 cm within the space of a month; approx. 81% of all hairs are in this phase

The hair stops growing, the cell matrix stops producing cells so that the follicles in the lower area constrict; approx 3% of all hairs are in this phase

After 2 to 6 months the hairs fall out, the hair root can regenerate in order to subsequently form a new hair; approx. 18% of all hairs are in this phase

In the case of people with hereditary hair loss, the length of the growth phase reduces over time and hair loss occurs earlier on. This process is triggered by dihydrotestosterone (DHT).

DHT is extremely important for the formation of the male embryo and development from boy to man: secondary sexual characteristics such as beard growth and body hair are caused DHT. Men who are genetically predisposed to hair loss produce too much DHT. As such, formation of the messenger c-AMP, which is essential for hair root metabolism on the scalp, is inhibited. The result: the growth phase is considerably shorter, the hair roots wither and eventually no longer form new hairs.

At the same time, these men, given their genetic make-up, have a relatively high number of DHT receptors at their hair roots which means these react more sensitively to high concentrations of this hormone.

There are lot of myths as to how hereditary hair loss can be stopped. One thing's for certain, creams which are applied to the hair are ineffective. Hairs do not contain living cells which can absorb active ingredients. In this case you really do have to get to the root of the problem! And the earlier you do this, the better.

This is where Alpecin Caffeine Shampoo comes in. After all: Caffeine inhibits the effect of DHT on hair growth and, as a result, the growth phases of hair roots are once again extended to a healthy length.

Caffeine – an all-round talent with a health-boosting effect

Numerous health-boosting properties have been ascribed to caffeine. Since the 1970s, the first scientific results have shown how effective caffeine is for the body: the substance stimulates the nervous system and accelerates cardiac activity and the metabolism. Furthermore, the highly potent ingredient protects against liver cancer and type II diabetes, increases sensitivity to insulin, influences the hormone adiponectin, which regulates our feeling of hunger, and can also reduce the risk of developing basal-cell cancer. The positive effects of caffeine on the hair have been well known for a good 20 years. Caffeine is thus one of the best and longest researched active ingredients in the fight against hereditary hair loss.

The Alpecin research team headed up by Dr. Klenk achieved a major breakthrough in 2004:
They realised that caffeine neutralises the harmful effect of DHT. Following on from this discovery, Alpecin was the first brand to develop products containing caffeine.

The most important property of a caffeine shampoo for men with hereditary hair loss is the stimulating effect on hair growth. A special pharmaceutical carrier base (galenic formula) in Alpecin Caffeine Shampoo ensures that the caffeine is transported to the scalp where it blocks the DHT each time the hair is washed. Hair root activity is boosted and hair growth is stimulated. To allow the full effect of the shampoo to develop, leave the shampoo to act on the scalp for at least 2 minutes and use daily. After an exposure time of just two minutes, the caffeine can be absorbed by the hair follicles and remain there for up to 24 hours. 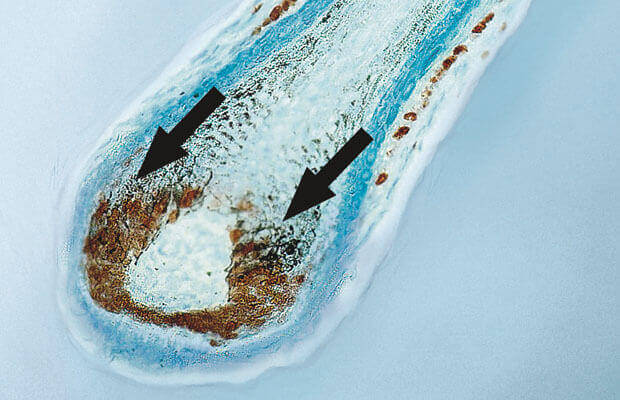 Prevent hair loss before it is too late

Men from families who suffer from hair loss are most likely to be genetically predisposed and are very likely to go bald themselves.

But it doesn't have to get that far if caffeine is used early on as a preventative measure. Alpecin Caffeine Shampoo keeps the hair healthy and protects the hair root from the negative effects of DHT. Daily use can break the viscous cycle and lead to a healthy full head of hair. If you don't want to wash your hair every day, you can also use Alpecin Caffeine Liquid.