A receding hairline – what is that and how is it recognised? 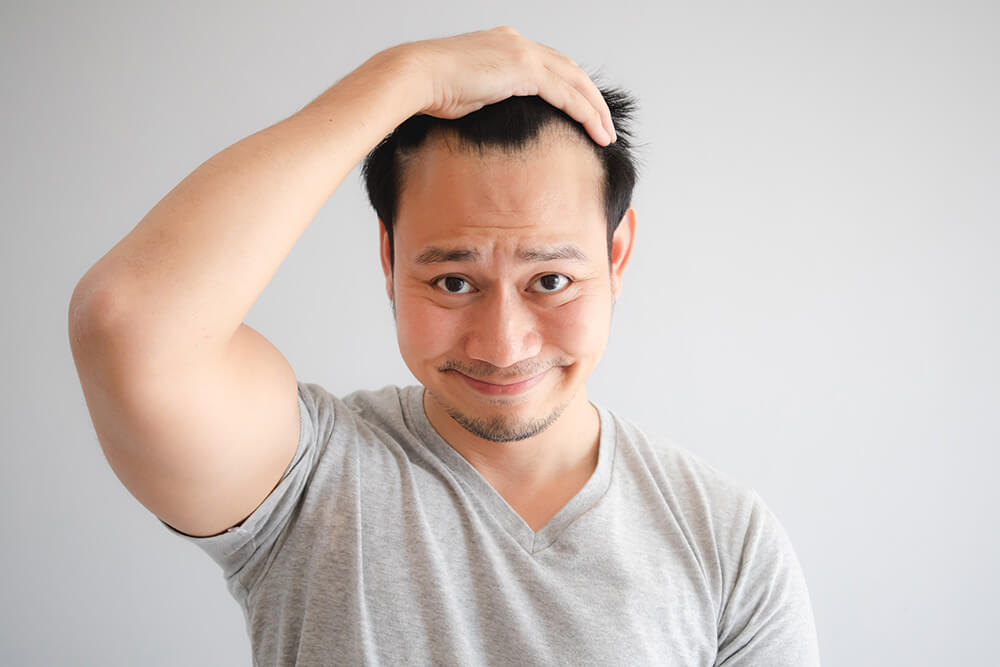 A loss of hair at the hairline above the temples is referred to as a receding hairline. Men in particular are affected by this. In the past, a receding hairline was seen as a dignified sign of ageing. Sufferers of calvities frontalis, as it is known in technical terms, are now far from proud of this problem. After all: Today a full head of hair is seen as a sign of vitality and attractiveness, whilst a lack of hair is regarded as a lack of aesthetics, potency and youth.

Nowadays a receding hairline is seen as a problem by those affected. Numerous methods have been developed to help solve this issue which work by preventing, hiding and counteracting hair loss. Moreover, there are a plenty of haircuts which complement men with a receding hairline.

What causes a receding hairline?

Androgenetic alopecia, i.e., hereditary hair loss, is often responsible for a receding hairline. The hair starts to thin around the tonsure and temples as early on as puberty. That's why men are advised to prevent the progression of hair loss early on.

Hereditary hair loss is caused by a gene defect which affects very many men. This causes the body to react very sensitively to the endogenous hormone DHT. DHT is the abbreviation for dihydrotestosterone, a metabolic product of testosterone.

Testosterone is also referred to as the male sex hormone as it is present in men to a larger extent. Nevertheless, the idea that men with a receding hairline or tonsure have a lot of testosterone is actually false. Hair loss is caused by a hereditary oversensitivity to DHT.

What are other possible causes of hair loss?

Further reasons for a receding hairline.

Stress is a state which you should always try to avoid wherever possible as it disrupts the hormone balance in your body. This can often provoke or accelerate hair loss. Of course, it is not always possible to switch off from the stress of everyday life and work. Which is why it is all the more important to strike the right balance with relaxation exercises or a regular hobby which reduces your stress levels.

Sensitive skin is, itself, susceptible to skin irritation which additionally stresses the hair follicles and promotes hair loss. The use of unsuitable care products with aggressive ingredients aggravates the situation unnecessarily. To protect the hair, you should pay particular attention to care products which suit both you and your skin.

Incorrect hair care frequently leads to a sensitive scalp but can also have a negative impact on the hair structure leading to hair loss. Hair volume can also suffer from these mistakes which means that any bald spots become more visible. You should avoid these mistakes.

A mix of lots of different ingredients which counteract each other is also far from ideal. Stick to products with the same aim and which, ideally, complement each other. 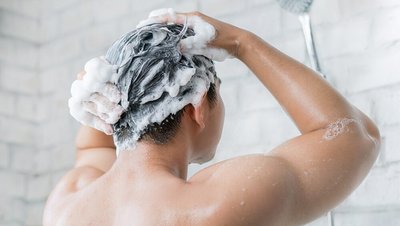 Follow the instructions for using the product. Many nourishing ingredients need to be massaged in well and have to stay on the scalp for one or two minutes before being rinsed out. If you have longer hair, you should not normally apply shampoo to the ends, it is sufficient for the shampoo to run through the hair when it is rinsed out. Never use excessively hot water (maximum of 37 degrees) when washing your hair.

Good scalp protection is also recommended. This includes, for example, protecting the scalp from the harmful effects of the sun. Sun creams which are specially designed for the scalp are available such as Alpecin Scalp Sun Liquid which is quickly absorbed, is non-greasy and not only protects the skin from harmful UV radiation, but also supplies with hair roots with caffeine.

Despite hereditary factors and a frequent disposition to hair loss around the temples, you can prevent a receding hairline. It is important to this end that you strengthen the stressed hair follicles and improve hair growth. Well-known products against premature hair loss are caffeine, finasteride and minoxidil.The effectiveness of all three active agents has been tested and found to be good.

The use of caffeine is a good way to prevent a receding hairline. For example, a caffeine-based shampoo can be used on a daily basis without triggering skin reactions. In this way, the active agent penetrates the scalp each time the hair is washed. An exposure time of two minutes is enough to allow the caffeine to penetrate into the follicle unit of the hair where it can shield the hair root from the negative impact of testosterone. Oversensitivity to DHT, the cause of hereditary hair loss, is reduced and the hair root is once again energised. As a complement or alternative to regular use of a caffeine-based shampoo, you can also use Alpecin Caffeine Liquid to prevent hereditary hair loss and receding hairlines.

Finasteride is prescription-only and is hormonally effective. As a rule, it comes in tablet form and is taken orally. As with many hormone products, lot of people experience severe side effects which can range from physical disorders such as impotence through to psychological problems including anxiety disorders and depression. Like with almost all medication, the dosage frequently not only determines the effectiveness, but also the likelihood of the occurrence of side effects.

Unlike finasteride, prescription-only minoxidil is not taken orally but applied to the scalp. This medicinal substance is applied directly to the receding hairline and works to strengthen the hairs and hair follicles here. Some people experience sensitive skin reactions such as redness and dandruff when using minoxidil. Hair care products containing the active agent caffeine mentioned above can represent a skin-friendly yet effective alternative.

The best way to deal with a receding hairline is to take preventative action. If your hairline is already clearly receding, you can also hide the affected areas.

Very simple measures can be used to style your hair so that the receding hairline is covered. This can be achieved with both short and long hair.

A simple approach is to change your hair colour slightly. Highlights and other subtle changes distract from the hairline.

The last option: a hair transplant

If you find your receding hairline particularly bothersome or if it is very pronounced, the last option is a hair transplant. There are various methods here. The most common one involves the removal of hair follicles from an area with greater hair growth, e.g., the back of the head where hairs with DHT-resistant roots grow. The follicle units removed are then planted in the bold areas of the scalp. After a few weeks, new hairs grow out of these follicles which can result in a significant visual change after just a few months. Good preventative measures then need to be taken to prevent the cycle of hair loss starting again straight away.

Hairstyles for men with a receding hairline:

There are a number of hairstyles for men whose hairline is starting to recede which are able to hide this problem and yet still look modern.

If your hair is only receding slightly and you otherwise have good hair growth you can let your hair grow. You have two choices: either a young-looking fringe where the slightly layered fringe falls gently over the temples or you opt for longer hair with a bun or ponytail. Especially when combined with a beard, long hair can look extremely masculine, youthful and modern.

A slightly chaotic messy look, which is very popular among men in their thirties, is another good option. It should look as though you have just got up or have jumped out of the shower and you didn't have a lot of time to style your hair. Yet this messy look is often surprisingly time-consuming.

You should never try to place or brush longer strands of hair over bald areas in order to hide these. This often results in the hair loss around the temples merely being highlighted! A side parting, however, can look great. You can create this with a comb and then fix in place using a premium care product. You should make sure that the fixing product you use is kind to the skin in order to avoid further hair loss due to unnecessary skin irritation.

If you don't know what best suits you, you should talk to your hairdresser. Experts who specialise in male hairstyles often have plenty of good ideas for elegantly hiding receding hairlines.

Regardless of the style you choose: Make sure you use suitable hair care products. This includes a sufficient supply of caffeine to the hair follicles and good skin tolerance. This, ideally, allows you to considerably delay or even stop the progression of hair loss.